The “Camino Primitivo” or Primitive Way was first route known for its historic reference and used by King Alfonso II in IX century to visit the tomb of St James . At the time of the discovery of the grave of Saint James, most of the Iberian Peninsula was under the Islamic influence, with Kingdom of Asturias being the only independent area. Oviedo was the Kingdom’s capital and it is believed that the King Alfonso II made the first pilgrimage from there. The route was safe and well used by many pilgrims until the development of the French Way and the shift of the capital to León

In our hostel we are specialized in giving good service to pilgrims offering a resting place, homemade food and breakfast at affordable prices.

The step 7 stage starts at Grandas, Asturias following the AS-28 road towards Fonsagrada. The pilgrim hostel (albergue) of Castro (sleep 16) is located at the 5.1 km and attracts visitors for its simplicity and location. Nearby is Pradaira, off this village we find the hermitage of San Lázaro, following by the village of Peñafuente.
On the ascent to the ‘Alto del Acebo’ we find Camino Bustelo, last Asturian village before reaching the port
The autonomous community of Galicia begins just as the road starts to descend and reaches the village of El Acebo where there is a bar.
Following we reach Fonfria where the chapel of Santa Maria Magdalena belonged to the Order of St. John is located. Two kilometres further is the village of Barbeitos where there is a restaurant called Catro Ventos.
Passing through the village of Silvela with the chapel of ‘Santa Barbara do Camín’ to reach Paradanova (2 km from Fonsagrada), after the ‘Chapel of Santa Cruz’ the pilgrimage route forks , choose the path to the right (i.e. the one by the road) and follow the directions of the shell sign. Uploading and after passing through a sawmill (wood work factory) come to a crossroads, which indicates yellow arrows on the floor in a different sense. If we raise sight see 35 meters laterally Cairn so we take to the right, and our Guesthouse is 95 meters away.

From Fonsagrada (Padrón) we arrive at Montouto. Where are the remains of the former Royal Hospital founded by the Castilian King Pedro I ‘el Cruel’ in 1357. Location with panoramic views ideal for relaxing before going down to Paradavella.
Then we have a good climb through Lastra, A Fontaneira and in about 27 Km we reached Cadavo-Baleira, small village with services and good pilgrim hostel with 22 beds. Pilgrims can go about 8 km more to Castroverde where there is a new brand new pilgrim hostel with 34 beds.

We offer free secure storage for bicycles and there is ample parking space for cars down the street around the hostel. 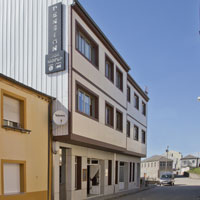 You can choose from a range of rooms including en-suite rooms with panoramic views of the mountains.  Rooms are tastefully decorated and furnished with comfortable bed, flat screen TV, free high speed Wireless Internet, shower, and central heating. Additionally we offer guests a laundry and ironing service.